How many immigrants are there in Norway?

At the beginning of 2021, there were 800,094 immigrants living in Norway, of whom approximately 240,000 had a refugee background. In addition, there are almost 198,000 people born in Norway to immigrant parents in Norway. Together, these two groups make up 18.5 per cent of the population of Norway. The immigrant population has grown by 9,600 persons during 2020, which is the smallest growth since 2002 (Steinkellner & Gulbrandsen, 2021).

The low growth in 2020 can largely be attributed to the restrictions in connection with the COVID-19 pandemic.

However, there was also a decrease in the number of newly arrived immigrants in Norway in the years prior to 2020. Since the peak year of 2011, when almost 80,000 people immigrated to Norway, there has been a steady decline in immigration. Emigration has not decreased by as much in the same period, leading to a decline in net immigration in most of the years since 2012. (Figure 1.1)

Immigrants live more centrally than the rest of the population

Figure 1.2: Distribution according to the centrality classification of the municipality of residence for the population as a whole, immigrants, and four groups of immigrants, as a percentage. 2020 (Guldbrandsen et al., 2021) 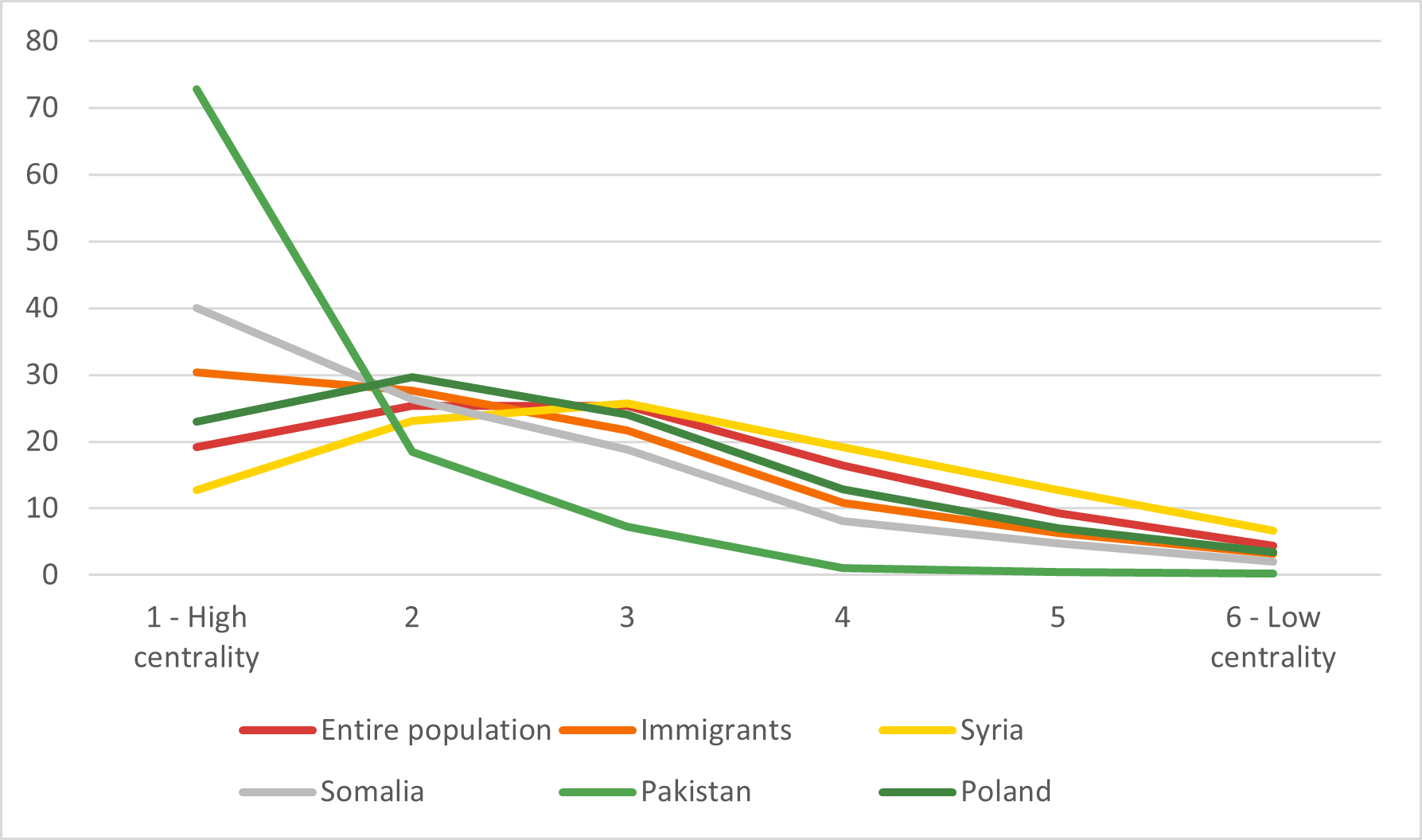 Where immigrants settle is closely correlated to their reason for immigration, i.e. whether they have come to Norway as refugees and been settled in a particular municipality, or whether they have come in connection with a job or for family reasons. Many coastal municipalities in northern Norway and western Norway have a large share of labour immigrants. Immigrants with education as their reason for immigration are most concentrated in central municipalities, while newly arrived refugees live less centrally. There is often a correlation between the proportion of family immigrants in the municipality and the proportion of labour immigrants and/or refugees living in a municipality (Guldbrandsen et al., 2021).

Where refugees live also tends to vary according to how long they have lived in Norway. Initially, this group tends to live less centrally, compared with the rest of the population. Within five years of settlement, a certain share tend to move on to the most central areas of Norway. Among the refugees settled in 2011 and 2012, around 20 per cent moved away from their first municipality of residence within five years of settlement. This is a lower proportion than among the refugees who were settled before 2011, according to Statistics Norway’s monitor for secondary migration. In other words, nowadays more refugees are staying in the municipality in which they were first settled. The introduction scheme for newly arrived immigrants appears to give people with a refugee background a stronger connection to the first municipality in which they live (Strøm et al., 2020).

Half of all immigrants come from European countries

Figure 1.3 shows that the composition of the immigrant population by national background has changed over the past 20 years. Since the enlargement of the European Union in 2004, the share of immigrants from EU countries in Eastern Europe has increased significantly. At the beginning of 2021, a quarter of all immigrants in Norway were from these countries, compared with only 5 per cent in 2002. By contrast, the proportion of immigrants from the Nordic countries hashalved from 19 to 9 per cent in the same period.

Most immigrants in 2020 came to work

People immigrate to Norway for a variety of reasons. While some people immigrate in order to work, study or be reunified with their families, others are fleeing from war or a humanitarian crisis.

Around 24,400 non-Nordic citizens immigrated to Norway for the first time in 2020, which is far fewer than the previous year. The reduction in immigration must mainly be attributed to the COVID-19 pandemic. Work was the main reason for immigration among non-Nordic citizens in 2020. A total of 11,000 labour immigrants came to Norway this year. This was followed by 8,300 who immigrated for family reasons and 2,500 refugees who were granted residence on grounds of need for protection. Almost 2,200 people were granted residence due to education (Kirkeberg, 2021).

Since 1990, a total of 34 per cent of immigrants have come to Norway to work, while 10 per cent had education as their reason for immigration, 19 per cent were refugees, and 36 per cent came because of family ties to Norway. The remaining 1 per cent came to Norway for other reasons.

Figure 1.4 shows that there is wide variation in the number of newly arrived refugees and labour immigrants from year to year, as this is often related to international circumstances and economic fluctuations in the labour market. 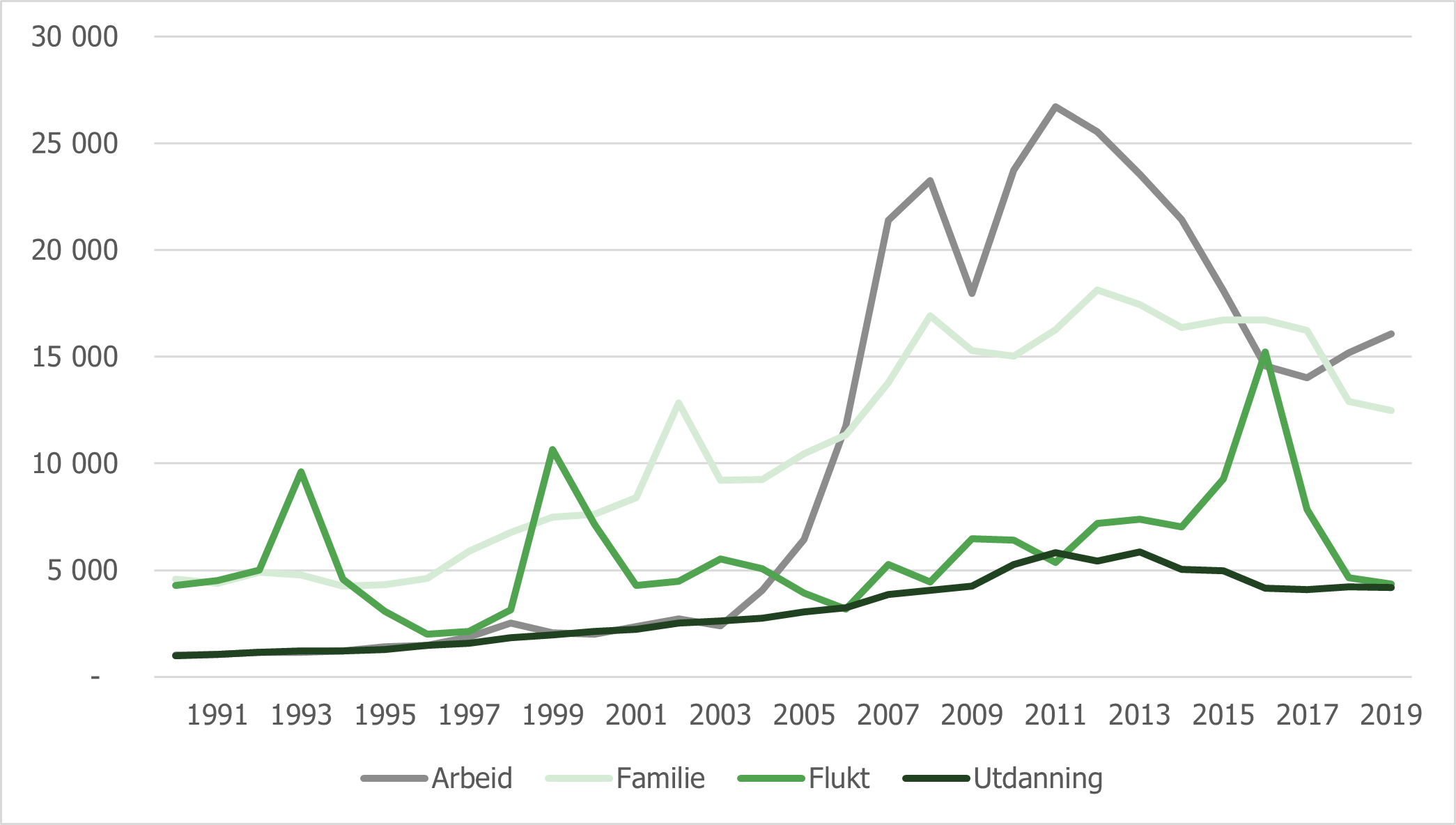 The rules concerning entry, right to work and right to study vary for people from different countries. Nordic citizens are free to enter Norway to live and work. The rules for entry and residence for EU and EEA nationals are relatively straightforward, compared with those that apply to immigrants from countries outside the EU and EEA. As a result, 80 per cent of the labour immigrants had a background from European countries in 2019, while almost all the refugees are from countries in Asia and Africa. Among people from North and South America, family ties was the most common reason for immigration (Statistics Norway – SSB, 2019f).

Integration is a process that takes time. It will take some time for most immigrants who settle in Norway to acquire relevant skills, find a job, learn the language and make social ties in the community. Unsurprisingly, there is therefore a correlation between length of period of residence and a number of the indicators of integration. Both employment and participation in voluntary organisations increase during the first few years after arrival in Norway, and immigrants with a longer period of residence tend to have both higher income and better living conditions.

Some immigrants have a relatively short period of residence in Norway. In 2021, just under a quarter of all immigrants had a residence period of less than five years, and about half (48 per cent) have lived in Norway for less than ten years (Statistics Norway – SSB, 2021f).

Figure 1.5: Length of period of residence among immigrants from the five countries with the largest immigrant populations. 2021 (Statistics Norway – SSB, 2021f)

There are differences in the distribution broken down by length of period of residence between immigrants from different countries. Figure 1.5 shows this distribution for the five countries with the highest number of immigrants to Norway in 2021. More than half of the immigrants from Sweden and Somalia have lived in Norway for more than 10 years, while almost all the Syrians have come to Norway relatively recently – 7 out of 10 in this group had a period of residence of less than five years (Statistics Norway – SSB, 2021f).

More than half of refugees have little or no education

Figure 1.6 shows that there are significant differences in maximum educational attainment among immigrants with different reasons for immigration. More than half of the refugees in Norway have not completed upper secondary education.

By contrast, three-quarters of the people who came to Norway to study have education at tertiary level (university or university college). There are also relatively many highly educated immigrants among the labour immigrants – 45 per cent of the people in this group had higher education, as is illustrated in Figure 1.6.

What characterises people born in Norway to immigrant parents?

People born in Norway to immigrant parents make up a relatively small proportion of the population. This group is nevertheless very interesting from an integration perspective. As a general rule, their parents immigrated as adults, while they themselves were born and raised in Norway, meaning they are in a very different position to their parents in terms of their ability to cope in society. Most of the children born in Norway to immigrant parents have spent their entire childhood, and had most of their socialisation, in Norway. Consequently, their early years and upbringing have been shaped by the same institutional framework as people without an immigrant background (Kirkeberg et al., 2019). This group is therefore regarded by many as a “litmus test” for integration in Norway.

Figure 1.7: People born in Norway to immigrant parents, broken down by their parents’ world region. 2021. (Statistics Norway – SSB, 2021a)

People born in Norway to immigrant parents live more centrally than both immigrants and the rest of the population. Among people born in Norway with an immigrant background living in their own household, 63 per cent live in the six most central municipalities in the country. By comparison, this share is 32 per cent for immigrants in general and 21 per cent for the rest of the population of a comparable age (Guldbrandsen et al., 2021).

At the same time, the share with only compulsory primary and lower secondary education is also higher among people born in Norway to immigrant parents. In 2019, almost a quarter had primary and lower secondary education as their maximum educational attainment, while the corresponding share was 17 per cent among people without an immigrant background (Statistics Norway – SSB, 2019a).