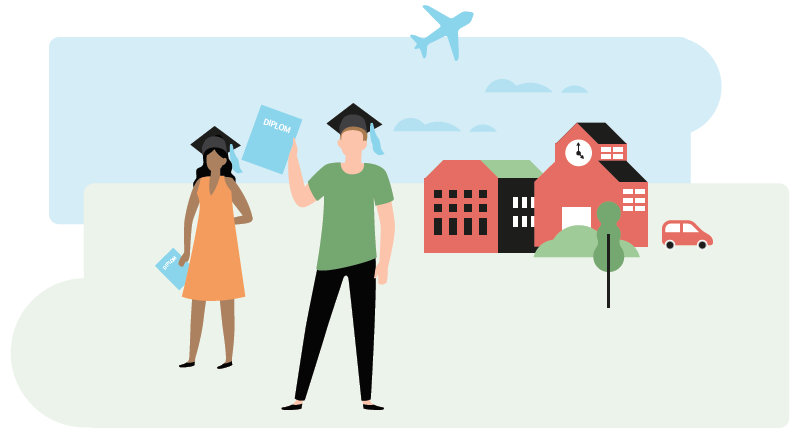 Education is an important source of knowledge for people to understand the world around them and improve their life situation. The Norwegian labour market as developed so that there are fewer jobs with low qualification requirements and a greater risk of falling outside the labour market if the person in question does not complete an upper secondary school education (NOU, 2018:13). The dropout rate from upper secondary school education is considered a problem both at an individual and socio-economic level (Falch, Johannesen & Strøm, 2009), and it is a political objective with broad support that as many people as possible complete upper secondary education. No least, education is highlighted as a key to integration (The Ministry of Education and Research, 2018).

From and including Reform 94, it has been common to measure completion within five years of starting upper secondary school education. It is worth noting that this is an early measuring point in an international context (Vogt, 2017) . Among those who have not completed their education after five years, many will still be in training, others will be in work and many will complete their education later (Markussen, 2016). Another objection to the objective is that the standardised course in most vocational programmes is four years (two years in school and two years apprenticeship), while the general studies programmes only take three years to complete. In 2020, Statistics Norway took this into account by adjusting the objective to apply to completion with six year for those taking vocational subjects (Bratholmen, 2020).

Young immigrants are less likely to complete upper secondary education than other young people. Norwegian-born to immigrant parents, on the other hand, carry out almost as much as their peers in the rest of the population. In the IMdi's statistical solution, the implementation figures are limited to persons between the ages of 16 and 24, and show the proportion who have completed within five years. Among young immigrants who started upper secondary school education in 2014, 65 per cent had completed by 2019. The corresponding proportion was 77 per cent among Norwegian-born young people with immigrant parents and 80 per cent among peers with Norwegian parents. Over the past five years, the completion rate has increased in all the groups (IMDI, 2019a).

Factors of particular importance for completion

In addition to immigrant background, the probability of completing upper secondary school education also differs systematically with regard to several other key variables, such as socioeconomic background, gender, grades from primary and lower secondary school, and which education programme the person takes. It is well documented that the socioeconomic position of the parents, measured in different ways, has a lot to do with how well the children are doing in school (Bakken, Heggen & Helland, 2016). As many young immigrants have parents with lower than average education and income, different socioeconomic backgrounds may also be a partial explanation for the immigrants’ lower probability of completing their studies.

Norwegian-born young people with immigrant parents complete upper secondary education to a higher degree than their socioeconomic background would imply (The Directorate of Education, 2017). Based on this pattern, in addition to high measurements of time spent on homework and ambitions for higher education, researchers have identified a separate educational drive among minority students (Bakken & Hyggen, 2018). However, this pattern is not as unambiguous among young people born abroad (The Directorate of Education, 2017).

Young immigrants often face further challenges and have more catching up to do compared with their peers with Norwegian parents. This is especially true if the person has arrived in Norway late in his or her school career with little or in some cases no education from his or her country of origin (Thorshaug & Svendsen, 2014). The period of residence and country background are thus relevant variables that influence the degree of completion among young immigrants (Bratholmen et al., 2019). People with a background from the EU/EEA have the highest proportion of final qualifications achieved in upper secondary school education before the age of 25. People with a background from African countries have the lowest proportion of final qualifications achieved (Inestebø et al., 2021).

In 2019, gender differences in school performance and educational pathway were highlighted by the Stoltenberg Committee (NOU, 2019:3). When we examine the importance of immigrant background and gender together in Figure 1, we see that there is a gap between immigrant boys and the other groups in particular. Among immigrant boys who started upper secondary school education in 2014, 58 per cent had completed by 2019. It is worth noting that the gender differences in completion of upper secondary school education are greater among immigrants and Norwegian-born young people with immigrant parents (both 14 percentage points) than among peers in the rest of the population (9 percentage points). In addition, women generally achieve a higher proportion of final qualifications by the age of 25 compared to men (Inestebø et al., 2021).

On average, immigrants achieve about 5 points from compulsory education fewer than the rest of the population and about 3 points from compulsory education fewer than Norwegian-born young people with immigrant parents (IMDi, 2020). The grade level in primary and lower secondary school is the single factor that has the greatest statistical significance for completion (The Directorate of Education, 2017). The grade level, in turn, is also influenced by social background variables (Bakken & Hyggen, 2018). Furthermore, one can envisage a mutual influence between grade level and school commitment, which can turn into a vicious circle for those concerned (E. Markussen, 2020).

There is a big difference between the completion rate among those who start vocational education programmes versus those who start in the general studies programmes. The figures for 2019 ( for students of all ages) indicate that the proportion was 89 per cent within five years in the general studies programmes and 72 per cent within six years for vocational subjects (SSB, 2019). The proportion is particularly low among male immigrants taking vocational subjects - only half of the group that started in 2013 had completed by 2019 (SSB, 2019). Recruitment to the various programmes is also strongly influenced by selection with regard to socioeconomic background and grades from primary and lower secondary school (E. Markussen, 2020).

One of the challenges in vocational training is that every year there are more applicants for a two-year apprenticeship after Vg2 at upper secondary school than places available. The proportion who do not get an apprenticeship is significantly higher among minority young people than among peers with Norwegian parents. This applied to 38 per cent of young immigrants and 38 per cent of Norwegian-born young people with immigrant parents who applied in 2017 and 2018, compared with 22 per cent among young people with Norwegian parents. In part, this is due to a somewhat lower grade average and a somewhat higher absence rate among the applicants from minority backgrounds but these conditions cannot explain the entire difference. It is like that discrimination and unequal access to useful contacts is also part of the explanation (The Directorate of Education, 2019a).

Young asylum seekers are only entitled to upper secondary education until the end of the academic year that starts the year they turn 18 (Lovdata, 2017).

Initiatives to increase the completion rate

The universe of existing initiatives that can contribute to an increased completion rate in upper secondary education is substantial, not to mention the universe of possible initiatives. For example, the Government’s integration strategy contains 17 points for enhancing the educational path for children and young people (The Ministry of Education and Research, 2018), while the Stoltenberg Committee’s report includes 64 recommendations (NOU, 2019:3). The emphasis on early efforts in both documents also illustrates that initiatives to increase the completion rate in upper secondary education may include initiatives in primary and lower secondary school or kindergarten.

Furthermore, young immigrants can benefit from targeted and universal initiatives. Initiatives that are targeted based on other criteria than immigrant background or minority linguistics may also have desirable consequences for the target group of young immigrants. For example, the Government wants to increase participation in kindergartens and after-school care schemes among minority language children, by expanding means-tested schemes with free core time and reduced payments for low-income families (The Ministry of Education and Research, 2018).

Among the Stoltenberg Committee’s recommended measures, there is one in particular that can be said to have great potential to increase young immigrants’ completion of upper secondary school education. A statutory right to an apprenticeship for everyone who completes the vocational Vg2 programme at upper secondary school has been proposed by various quarters on several occasions, albeit rarely solely based on the immigrants’ completion rate. The Committee’s mandate has been to propose effective measures to counteract gender differences in school performance and educational pathways. Given the low completion rate among immigrants in the vocational study programmes and the documented risk of minority young people not getting an apprenticeship (The Directorate of Education, 2019b), there is reason to expect that such initiatives will also increase the completion rate among immigrants. The Committee also bases the recommendation on calculations indicating that such a statutory right will be socioeconomically profitable (NOU, 2019:3).

Much research has been conducted among minority language students in the Norwegian educational system. However, it can be argued that a large proportion of the research has either not paid attention to the differences between young immigrants and Norwegian-born young people with immigrant parents or have chosen to focus on the latter group.

Furthermore, the challenges are particularly great among boys and among those who start vocational training programmes. Thus, there may be a reason to focus more research on the mechanisms that apply to these groups throughout their educational path and what initiatives may contribute to more people succeeding in completing their upper secondary education. Longitudinal studies and participatory research may be well suited for such purposes.

In 2015, the Knowledge Centre for Education published a systematic knowledge overview (Lillejord et al., 2015) of studies on initiatives to reduce the dropout rate from upper secondary education. At that time, no Norwegian studies were considered to be effect studies in the strict sense. Often efforts to reduce the dropout rate in Norway have been designed as larger packages, so that it is difficult to isolate the effect of the individual initiatives (Lillejord et al., 2015).

When it comes to the educational programmes for newly arrived young immigrants, we know that there is considerable variation between different schools, municipalities and county authorities. This applies to introduction programmes and combination classes and applies to organisation, target groups and content (Rambøll, 2016). Although there is a lot of enthusiasm for the combination classes, more knowledge is needed about what the best models might be that can serve as transferable examples. Furthermore, there is a need to monitor the extent to which everyone who needs such a programme, receives it.

In 2020, on behalf of the Ministry of Education and Research, researchers from NIFU and Fafo examined the possibility of initiating effect evaluations on educational programmes for newly arrived students (Lødding et al., 2020). The report concludes that the conditions are to a limited extent conducive to this, mainly due inadequate data and poor opportunities to include a sufficient number of students. In several contexts, there are also different practices in how the target group is delimited, i.e., uncertainty about who is and is not entitled to a given programme. This applies to the combination classes, among other things. The researchers recommend clarifying such conditions, as well strengthening the systems for registering educational programmes to newly arrived immigrant students.